September 2016: A New Pamphlet, 'Instructions for Making Me.'

After a few months of silence, it's become absolutely necessary to update this blog as I have something to say. I am very happy to announce that I have a new pamphlet out with HappenStance and it's called 'Instructions for Making Me.' I wasn't going to say anything official until I had the actual publication in my hands. Nell Nelson via Jane Commane at the Poetry Book Fair sped a few copies over in time for my first reading last night. Luckily the winged gods of Hermes did actually manage to deliver the rest of the pamphlets in time, which I found under a bush in my front garden. A bit like a stork leaving a baby or something. So, yes, it's definitely a 'thing' now and I read from the pamphlet last night at Shindig in Leicester and sold a few. I read with Kathy Pimlott, Richard Skinner and Marion Tracy who were great.

If you're interested (hint hint) in finding out more, well, look here!  I'm really grateful to Nell Nelson for editing and producing such a handsome pamphlet, along with the artistic talents of Gillian Rose who designed the cover image. It's very ribby.

It's also very difficult to talk about your own work without sounding like, well you know...so I've taken a photo of Nell's comments on the pamphlet, along with mentions of new pamphlets by Paul Stephenson and Helen Tookey. They've also have new pamphlets out at the same time. I have a Smartphone now; I'm very contemporary these days and take random snaps of things all the time. Oh did I say I was on Instagram now, as mariamiskina? Well, I have now. Back to the other stuff: 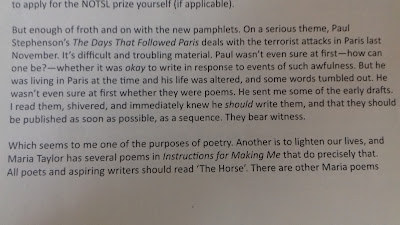 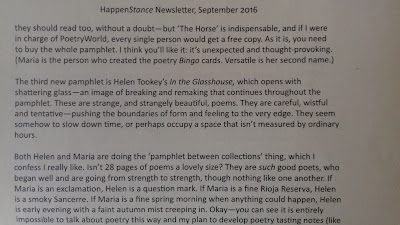 So there you go. I am an exclamation mark. I am a glass of Rioja. I am Spring. This is ironic as a shop assistant t'other week said my choice of top was the 'perfect colour for transitioning into autumn.' You get different seasons catered for in this pamphlet. Why not have a look, please and thank you.