When I was about 6 or 7 I had a curious urge to write a book. At that point it was a children's book, I wrote my first on A4 paper with lots of illustrations called 'Pinnochio - the true story' but now I'm happy to report my debut collection of poetry, Melanchrini, is out with Nine Arches Press at the beginning of July! There will be a launch at the Ledbury Festival on Sunday July 8th and at the Leicester Shindig at The Western on the 16th as well as other events too. You can read more about the details at the Nine Arches Press website by clicking here.

And here's the front cover... 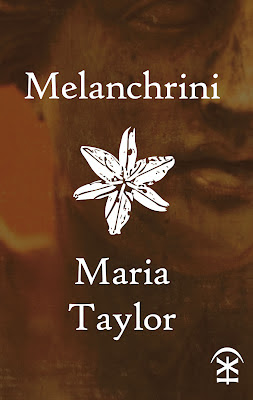 On a very balmy evening at the end of May – yes, balmy, there was actually sunshine – I went to Leicester’s central library to see and hear Ian McMillan. Ian is one of those rare poets in my book, one of the few that I grew up with because occasionally you saw them on the television and they were often on the radio. The whole show was energetic, funny and charged with a poetic eccentricity that made for an engaging evening. Ian begun by talking about the odd things picked up in conversation or strange notices he’d taken off walls because there was something that little bit queer about them. For example, an A4 notice on a library desk somewhere with the words, ‘we do not supply squeezy bottles of washing-up liquid here.’ There’s a poet-as-magpie approach to language, ‘you couldn’t make this up’ was a phrase Ian used a lot that evening, which is true, but maybe it’s more about how poets use this information – the art of random. Poets are always being random I think, even when they don’t intend to be funny, and eventually you create a fresh meaning from ‘the drunkenness of things being various’ as Louis Macneice once said in a poem called ‘Snow.’ This in itself is a random thought.


Ian talked about his family and spent quite a while on recollections of his old, English teacher - debonair and corduroyed – who would later become some sort of media success story due to a surprise career doing voice overs on TV adverts. The reason why this particular teacher was so influential was simply because he asked the class to write poems as opposed to killing them with over analysis. He also talked about some of the things he’s done in his poetic career – yes I’ve just put the words ‘poetic’ and ‘career’ next to each other, astounding. Anyone with half a brain knows that humour isn’t just an indulgence, it comes from a serious and interesting place. Humour can be subversive, surprising and perhaps even more dangerous than outright protest. Funnily enough that documentary recently on John Cooper Clarke supported this thought and he’s another poet I grew up with. To finish, Ian read from his recent Smith/Doorstop pamphlet, This Lake Used to be Frozen: Lamps, which features poems with titles like ‘A Walk Where Almost Nothing Happens’ and ‘Did You Ask for a Decaff off that Other Lady?’. They are funny and serious, (read ‘A Series of Novels). Here’s a quotation from ‘As an Old Man Ian Remembers his Walks’:


Posted by Maria Taylor No comments:

Not (not) the Jubilee

﻿﻿﻿﻿﻿﻿﻿﻿﻿﻿﻿﻿
﻿﻿﻿﻿﻿﻿﻿﻿﻿﻿Always one to get the timings wrong on this blog post, I was thinking about the Jubilee. No, not the Jubilee that’s just passed, the one held in 1887. The reason why I was thinking about the one 125 years ago was because George Gissing wrote about it in his novel In The Year of the Jubilee (1894). Gissing was born in Wakefield, in 1857 and died in 1903. As a young man he was a brilliant student and won several academic prizes, but he was caught stealing from his fellow students at the University of Manchester, in an attempt to keep his prostitute girlfriend Nell (Marianne Helen Harrison), off the streets. He would later marry her, but the couple separated and Nell died of alcoholism. Gissing married a second time, this time to a lower class woman who also separated from him and was sent to an asylum. ‘Oh dear’, I can hear you saying, ‘this is grim’, but he wrote some exceptional novels which seem coloured by experience. Many of his novels are preoccupied with scenes of working class life in cities and Gissing is regarded as a fine realist. On his deathbed H.G. Wells and his (unofficial – he was still married) third wife Gabrielle Fleury argued over how he should be nursed and fed. Gabrielle in the French corner – starvation to combat the fever - and H.G. Wells in the British corner – beef and brandy.
Anyhow, this illuminating piece of context is drifting away from the Jubilee theme, so let’s return. What’s clear about the way Gissing depicts the Jubilee celebrations in London is the absolute lack of nationalism. It’s all about drinking and partying for the working classes if we are to believe him, as opposed to the 2012 Jubilee, which is more concerned with dainty bunting:

“Beyond sat a working-man, overtaken with liquor, who railed vehemently at the Jubilee, and in no measured terms gave his opinion of our Sovereign Lady; the whole thing was a 'lay,' an occasion for filling the Royal pocket, and it had succeeded to the tune of something like half a million of money, wheedled, most of it, from the imbecile poor. 'Shut up!' roared a loyalist, whose patience could endure no longer. 'We're not going to let a boozing blackguard like you talk in that way about 'er Majesty!' Thereupon, retort of insult, challenge to combat, clamour from many throats, deep and shrill. Nancy laughed, and would rather have enjoyed it if the men had fought.”

It’s also about women getting out of the house. The main character Nancy Lord, rebels against her father, in an effort to taste a bit of freedom:

"I should like to walk about all night...as lots of people will. The public-houses are to be kept open till two o'clock. . . . It's horrible to be tied up as we are; we're not children. Why can't we go about as men do?"

Strident words from Miss Lord. I wonder if our present-day street parties where supermarket magazines advised women on the art of making bunting and decorating cakes with Union Jack colours are actually a step towards a return to conservatism. Or maybe not a return, but a class issue. Middle-class women don’t drink at street parties, they make the sandwiches. Nancy Lord is a lower middle-class woman who wants to have a night off respectability. Gissing is just one voice here, but I imagine he saw a fair deal to support his writing. Also there’s the argument of whether or not women of the time needed a man to do their talking for them, which is one to take into consideration. Still, it’s interesting from a 2012 perspective.