Mr. Commonplace and I were sitting round the breakfast table debating the pros and cons of social networking. I had a moment of insight, I said 'If it didn't happen on Facebook, then it didn't happen at all.' So the following blog post is what didn't happen, except it happened to me.

Over the late summer months I've been reviewing again. I realised it had been a while. It's a long process for me. I read the books, then read them again with a pencil and add lots of scribbles and dainty star things that are meant to remind me of something. Then I start drafting a review, and draft again. Then I usually draft again. I show it to Mr. Commonplace as a trial reader and ask if it makes sense. I don't set out to lavishly praise or destroy, I just want to give a reader an idea of what's going on and make sense of the poems for myself. I make a point of including lots of quotations so I can back up what I'm saying. The more poetry I read the more critical I become of my own. Overall I think that might be a good thing, but it doesn't quite feel like that right now.

Because it was summer, with everyone at home, I got up early on some days in order to have some review writing time. I'm less of a night owl now. So by the time it was officially breakfast I was already on the third or fourth super-caffeinated drink and making strange conversation about why lots of poets use those extra spaces between words and I still don't know what they're called. Then a little 'My Little Pony' on TV.

In terms of attending readings, it's often quiet during summer, but I did manage to catch Maitreyabandhu in Leicester, reading new poems and earlier ones, notably from The Crumb Road which I reviewed a couple of years ago. I love his 'Stephen' poems. Stephen died in a road accident when he was a teenager. There was a connection between the two, but as Maitreyabandhu said they were too young for it to be called love as such. Only the made-up future remains, 'Now you're twenty five / and have learnt the art of smiling.'

The new issue of Under The Radar came out in August. I'm Reviews Editor for UTR, which involves lots of reading and admin. It's a always a relief to see the reviews in print and I am indebted to the reviewers. In this issue they included: Peter Carpenter, Deborah Tyler-Bennett, John Foggin and Michael Thomas. There was also a special feature by Richard Skinner on his series of Vanguard Readings and the anthology which came out of this event. For the next issue there will be more female reviewers than male ones. I already have a review by Kim Moore. The one thing that bugs me about the editing is that so many books arrive and we can't review them all. It's a shame, but I'm so grateful to all those enthusiastic reviewers out there who write out of love and/or because they feel they need to and receive little if no pay. I thank you!

There was another reading was in early September in London and this time I was reading there myself. I was pretty nervous about the whole thing. Joanna, (cousin Commonplace) came along again, and although she's not a poetry type she probably will be before long if she keeps attending things. I brought a snazzy raincoat and Joanna said I looked smart and it gave the impression I had a proper job.

I read at the Betsey Trotwood with three other poets in my half of the evening, these were: Miriam Nash, Richard Osmond, Rena Minegnishi. They were great. I felt like an older thirty-something as they were all in their 20s. After the break there were readings from Stephen Kendall,  Kirsten Irving, Chris Dodd and Jasmine Cooray. But I missed those as I had to dash back to St. Pancras before I turned into a pumpkin. It was a lovely night though, organised by Miriam Nash and Roddy Lumsden. I also met a poet called Kathy Pimlott who had Notts connections and had written about the Carillon tower in Loughborough. It's a small world. When I got back to the Midlands it was very late and there were about 4 people around. It was quite a contrast to London with its huge crowds and diversions and pubs where people stand outside swigging £5 pints. It had a sense of unreality. Perhaps I dreamt it.

This is where the Ladybirds come in. This year is the 100th year of Ladybird books, which were initially published in Loughborough until 1999 before being sold off to Disney. Sad isn't it. I could just see myself  at Ladybird books cycling off to work everyday. Anyway, there is a lovely display in Charnwood museum in the park where the Carillon Tower is - spooky. 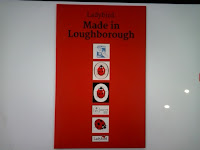 So now I have a week or two before Uni kicks in (like a mule!) and autumn scatters all its leaves.  It's early days, but there are plans for a new poetry thingy next year. A pamphlet. Won't say more yet.