I was very upset to hear of Joel Lane’s passing last night. He was a terrific writer. I know his poetry better than his prose and perhaps in time I’ll read more of his fiction. He’d won major awards as a Fantasy writer and that just goes to show his remarkable scope. Joel was a contributor to Overheard, Stories to Read Aloud published by Salt and edited by my husband Jonathan Taylor. There is a very moving post here by Jane Commane about Joel and his writings on the Midlands.

Joel had a very unassuming presence as a poet, even though he was extremely good at writing poetry. He seemed to shy away from the limelight. We once spoke briefly about him putting together a new poetry collection. He told me he wanted to but he felt a little disconnected from the poetry world. That was about a year ago. Many thanks then to Flarestack for publishing his final pamphlet of poetry, Instinct, a beautiful book I’d strongly recommend.  I’m including the poem below as an example of his ability to marry clarity and evocation so distinctively. I had tears in my eyes as I was typing this up.

Ghosts of the Living

After a day of bruised silence
you finally answered the phone
in a child’s voice. That night
your blank side came to my house

and stood on the doorstep, thin
and trembling, unable to hold on
to yourself. It took me an hour
to bring colour back to your face.

In the morning you left your shadow
pinned to my bedroom wall:
another still for me to run through
the projector of broken sleep.
Posted by Maria Taylor No comments:

Hi, it's been a long while I know. Can't believe my last entry was back in August. It's been a little overwhelming for me both home and work wise, but I'm trying to remedy things. Some poetry related highlights over the last few months have included attending some excellent readings by Jo Shapcott and Cherry Smyth, as well as being in the audience for Nine Arches Press's first 'Poet-tea' reading in Leicester. Also managed to catch a couple of writing days at The Poetry Business in Sheffield. Other than that it's been EDITING! Yes, EDITING! This hasn't been easy. Over the last two or so years, (I started wrapping up the Melanchrini manuscript around December 2011), I've written nearly 70 or so (maybe more, hard to tell in a way) poems and come to the conclusion that only around 25 of those are acceptable. That seems low in a way, but I'm getting very fussy. Some poems will need redrafting, some are just sketches and some are not worth reviving. There is a poem cemetery in my hard drive, many poetic corpses are lying around in unmarked graves. I think most poets like to think about new pieces, but I've wondered about those other 'abandoned'  poems and what their value was and still might be. Maybe their value was to write other poems alongside them where the original intent was actually realised. I've sent out a lot of 'not ready' poems as well as 'ready' ones and it's only time that makes your realise that. The moral is perhaps to hold on or to get decent feedback.

Anyhow, I have a reading coming up in Beeston! Here's a fabulous poster designed by Pippa Hennessy: 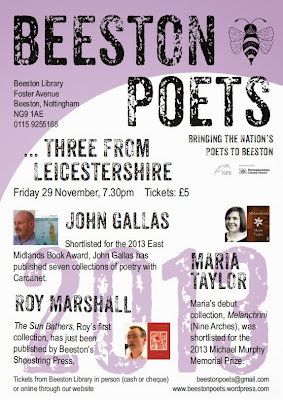 I am reading with John Gallas and Roy Marshall. Readers of this blog will know my high opinion of Roy's work and I'm also looking forward forward to hearing more of John's work. Roy Marshall has an EXCELLENT new collection out now with Shoestring, The Sun Bathers. I hope to write more on this very soon and include a poem from the book. It's wonderful that Roy's work is being so well-received in the press at the moment. His Crystal pamphlet Gopagilla has just been reviewed in The TLS alongside other great pamphlets by Kim Moore, Suzannah Evans, Ian Parks, David Clarke and others.

Come and join us in Beeston!

I will try and keep-up-to-date with this blog promise.