At this time of year it's customary for blogger to round-up their books of the year. I find that a hard thing to do in terms of poetry. Some of the poetry I've come across this year was published before 2013, this would include work by Mark Halliday (have blogged about him before) and two stunning books by Catherine Smith: 'Lip' and 'The Butcher's Hands.' I read those two from cover to cover and was struck by the range of subject matter and Smith's ability to write about darker (and therefore rather interesting) aspects of human psyche. I'm looking forward to getting a copy of her latest book, 'Otherwhere.' What an intriguing title. Another non-2013 favourite, also published by the fabulous Smith/Doorstop press was Carole Bromley's 'A Guided Tour of the Ice House.' That book sustained me through a evening of cancelled trains on the way home from Sheffield. Bromley's work is a pleasure to read: clear-sighted, direct and utterly engaging. Poems like 'In Another Life' and 'The Lovers' and 'South Bank and Eston Rotary Club, 1951' really grabbed me and there was so much in the book to curl up into. Funny, sad, wry, honest. I have the book by the bed and keep returning to it, that's a big mark of admiration for me.

So, I'm not done with 2013 yet. I have no doubt that 2014's blog posts will have some focus on things published this year. There's one book I'm going to focus on though and that's Roy Marshall's 'The Sun Bathers' published by Shoestring. Regular readers of this blog will know I have praised Roy's work over the last couple of years. In 2012 his pamphlet 'Gopagilla' was published as a part of a series of our Crystal pamphlets and it was packed with strong, memorable pieces, many of which can be found in 'The Sun Bathers.' 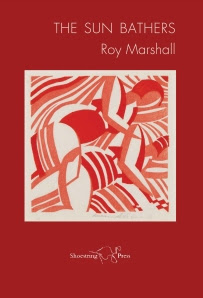 A first collection from Roy is a very huge deal, especially when you've seen a poet's work develop and grow over time. I know it's not just me though. When I read at Beeston Poets in November with Roy a couple of things struck me. Firstly, I noticed the audience was hanging on every word in his poetry and we experienced 20 minutes of lyric power tempered with a plain-spokeness which made the poetry immediate. One of the first times I heard Roy read was at Leicester's WORD! back in 2010, and I heard a remarkable poem called 'No Signals Available' which made me sit up and take notice. That poem is also in the book I'm happy to say. When I read 'The Sun Bathers' many of the poems were familiar to me, not least because they've appeared in a plethora of magazines but also because I've been lucky enough to have seen them at the drafting stage as well. Don't just take my word for it, at the Beeston reading an audience member requested a poem, which shows to me that readers form attachments with these poems. A great sign to my mind. You can find details of how to track down a copy here.

It's hard to pick an individual poem to share with you as there are so many notable poems. Many of these you can find on-line, but you should of course buy the book! My favourites include the 'Leonardo' sequence, 'Presence', 'Rose,' 'A Western Australian Piano Graveyard,' 'Relic' - this list could be longer, you get the picture. These are well-formed poems with a personal edge. They speak to you. As I said many of Roy's poems are on-line, so to avoid overlaps I've chosen 'Cimetero' which draws on the poet's Italian heritage. There are some sumptuous and evocative words and images, 'gellateria' honey heat and scent of rosemary, the child's innocence at the father 'who'll live forever' and the understated sinister sense of death and corporeal decay, colours 'deepening from terracotta to crimson.'

The gate kept a world out: scooters humming
along the road that ran down to the lake,
gellateria and monument.

Lizards froze, slipped into cracks, past photographs
set in granite, chrysanthemums on marble beds,
so different from the grassed churchyard at home.

I loved the honey heat, scent of rosemary
and privet, plots to walk between, adding dates
to calculate the ages of the dead.

One day, a grave, freshly dug, sides shored,
colour deepening from terracotta to crimson,
waiting not for Dad, who brought me here

because I asked, Dad, young and fit who'd live
forever, but for Nonno; next year, behind
polished glass, the face I'd know.
Posted by Maria Taylor No comments:

The Launch of 'Maps and Legends'


Here I am again. The blog seems to be mended and I'm like a child with a new toy. The launch of Maps and Legends - Poems to Find Your Way By, a new anthology published by Nine Arches Press, took place in the new library of Birmingham, earlier this month. The anthology is edited by Jo Bell and Jane Commane and marks the fifth anniversary of Nine Arches Press. 2008 was a very big year for me, I gave birth to my twins and life was never the same. Writing poetry, however, was not at the top of my priorities then, but at the end of 2009 I was beginning to write and had also just heard of a local  Midlands publisher named Nine Arches Press. A few years later and they'd published my first book and my reading - and thus my life - had been dramatically enriched by various Nine Arches publications and poets. This also included setting up the regular Shindig events in Leicester, which has meant bringing lots of fabulous poets to the Midlands and regular contact with Jane Commane. Jane has always been extremely modest about her successes with Nine Arches and is to my mind one of the key editors out there in contemporary poetry. There are some very exciting publications from the press to look forward to in 2014, but back to the anthology.
At the launch we were treated to some very fine readings from Nine Arches poets. It was great to hear Angela France's 'Canzone: Cunning' poem, 'Oh, woman / your grin seeded such an itch in my bones' as well as work from Matt Merritt, David Morley, Daniel Sluman, Roz Goddard and Myra Connell. The event was compered by Jo Bell, who many poetry lovers will have heard of and she brought a great deal of energy to proceedings. I have a few poems in the anthology myself, including a certain poem about a certain poet called Larkin. I've been reading the book over the last few weeks and though much of the work is familiar to me, the poems gathered together feel fresh and inventive in the context of the anthology. In addition to the readers listed above there is some great poetry by Claire Crowther, Peter Carpenter, Alistair Noon, Luke Kennard, Tony Williams, really I could go on. Obviously I'd recommend this book, but if you're interested in contemporary poetry you will not be disappointed! Oh yes and details of how to get hold of the book are available here.


Posted by Maria Taylor No comments:

I've had a few problems with the blog of late, there have been some Malware warnings coming up on screen. Fingers crossed you're able to read this now and the problems been sorted. Back to poetry... or more specifically poetry bingo. In the summer I put together a light-hearted bingo card of words and concepts which I noticed were cropping a lot in the poems I was reading. These words were mainly gathered from magazines and all of them were from contemporary sources. I shared one as a bit of fun with Helena Nelson and she decided to print them as a set, published HappenStance press! They soon became a set of four cards. The cards are an avant garde poem, bingo card, and postcard in one, they also look rather nice on a wall!  Here's a brief explanation from the HappenStance website explaining what the cards are about:

The set of four different cards can also fulfil a useful slot in terms of entertaining postcards for poetry friends. A5 in size, they contain the key words on the back as well as plenty of space to scribble messages, poems or aphorisms.

The bingo cards are available for purchase on the site, so click here to have a look.  A little eccentricity does you good!