May 2016: It's Spring... Publications, Events and Two Poems from Alison Brackenbury


Hi, here’s May so far. As I said in earlier posts, I’ve had a bit of a poetry hiatus recently. May has definitely been a time to get back on the poetic horse.  I’ve been writing and editing, but I’ve also had a couple of acceptances and...and... here’s the big news. In September I’ll have a pamphlet out with HappenStance Press, hurrah! At the moment it hasn’t got a title, I’m calling it ‘pamphlet’ for now, but hopefully a better title will appear. So, I’ve been doing that thing that a lot of poets do, take photos of and share on-line: 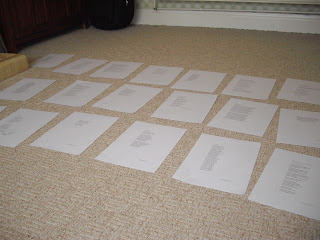 And yes, I could write an entire blog post about ordering and editing, and maybe I will when I find some spare hours hiding under a mattress or something. I’ll write more over future posts, but for now I’ll say this: I’m utterly delighted to have a publication with a press I deeply admire. Nell is a wonderful editor.  Some of my favourite poetry has been published by HappenStance Press. I first came across Mark Halliday through HappenStance and over the years I’ve enjoyed books and pamphlets by Fiona Moore, Chrissie Williams, Matthew Stewart, Rosie Miles, D A Prince, Tom Duddy and others. Hopefully it'll be out in September.

This has also been the month of attending poetry readings. Earlier on in May, I went to Jazz and Poetry in Nottingham to hear readings from three Nine Arches Press poets: David Clarke, Jo Bell and Daniel Sluman. These evenings are organised by David Belbin and John Lucas turns up with his Jazz band Four in a Bar and much heel kicking takes place.  The venue for the event has changed.  It used to be in the Guitar Bar across the road, but it’s now in the Polish Eagle Club. It’s a great new place with lots of space, panelled walls and a big dance floor. It reminds of the kind of places I used to attend at weddings and christenings as a girl. The atmosphere was very relaxed and all three poets delivered fantastic readings. It was Jane Commane’s  birthday, she runs the good ship Nine Arches. Jo presented her with a super choclately birthday cake and a good time was had by all.

In Leicester we had the May Shindig. I think it’s only fair to say that May has been Leicester’s month. They only just went and won the football didn’t they? Ok, I was born in Notts and raised within the bells of QPR, but I’m very happy for my closest city up the road. We even went to the Victory Parade. Now, on the subject of the Victory Parade, Shindig was scheduled for the same date. It soon became clear this wasn’t going to be practical. 250,000 people turned up in Leicester that day, but they weren’t going to Shindig. We had to cancel and rearrange the date for the 23rd. That was last night. We had readings from two excellent Leicester based poets, Shruti Chauhan and Lydia Towsey and we had the superb Alison Brackenbury all the way from Gloucestershire. It was an absolute treat having Alison join us, we were very lucky. She was reading from her new collection ‘Skies’ published by Carcanet. It’s had great reviews  in The Guardian and The Independent and been featured on Radio 4. Below are a couple of short but perfectly and richly formed poems from the collection, which Alison has very kindly allowed me to include here. Her lyricism is second to none or 'heavenly' as I said last night when I introduced her.

So May belongs to Leicester perhaps, but the author of Commonplace resides in a hinterland town between Leicester and Nottingham. We’re not forgetting Nottingham, oh no. I went to another More Raw Material, Alan Sillitoe event in Nottingham and heard some great readings from some of the contributors. There were three memorable performances from poets I know, but had never heard or seen in the flesh: Bethany Pope, Rosie Garland and Ruth Fainlight, Alan Sillitoe’s widow. Next week, all being well, I’m attending a reading at Five Leaves Bookshop with Jo Dixon and Kathy Pimlott. I’m currently enjoying their pamphlets.

Finally, I even had some poems published of my own. After some months off this has been quite lovely. This year I’ve sent off four submissions, one was a polite ‘decline,’ two have been acceptances and one is still at the artwork stage, although a poem’s been shortlisted. Who knows.  I have two poems up on And Other Poems and I’m grateful to Josephine Corcoran and Rishi Dastidar for selecting them. I’ve had two poems accepted by The North too. It really has felt like a while since this has happened.
To finish off, as promised, here are two poems by Alison Brackenbury. Please have a look at the book at the Carcanet website for more details.Both are a perfect example of how a short poem can convey so much.

I am cycling, in a sensible bright coat.
A girl comes pedalling, quickly by, loose shawls
skidding from shoulders, hitched skirt, silver pumps.
I was that girl. O may she ride her falls.


‘Will The Comet Survive Its
Encounter With the Sun?’
(astronomer, writing of Comet Ison)

This, I suppose, is what we do,
we fly into the sun
and some are gone and some survive
like shadows, limping on.
And some, far closer than stars,
fill all our eyes at dawn.