Attending the Aldeburgh Poetry Festival is habit forming. Last year I went to Aldeburgh for the first time and went again this year. By now there are many blog posts out there and I’m aware I’m adding to the list, but it takes me a while to process things. For example, last year I was thinking about some of the events and readings ages after they’d happened. This year I’m already looking back to some astounding readings by Helen Mort, Kei Miller and Kim Addonizio, but also poets I wasn’t so familiar with like Valerie Rouzeau, Dorothea Smart, Michael McCarthy, Choman Hardi, Peter Sirr and Christine Webb.  Perhaps that’s one of the draws of this particular festival, is that you go to discover new things rather to confirm what you know. Both years I’ve felt as if gained a great deal by going. It’s not near where I live, so there must be a special reason for travelling all that distance to get there. And yes, it wasn’t easy travelling through Friday rush hour and missing the first few events. But as soon I arrived I went straight to Snape on the bus and got on with it all.

Unlike last year, I hadn’t brought any advance tickets, which was useful, as I would’ve missed things, but I found I could get my tickets quickly enough anyway. I went to Kim Addonizio’s close reading of a Don Patterson poem and conversation between John Burnside and Helen Macdonald on language and nature.  It was all a bit of a rush and I had to eat my sandwiches like a schoolkid during Kim’s talk, but no one seemed to mind. I saw lots of people I knew and settled in quickly. The main reading was a real highlight; I went to the main reading with Helen Mort, Kei Miller and Jeremy Reed. I should say Jeremy likes glitter. He was throwing it around as he read. He said he ‘likes glamour’ at poetry readings. Very memorable. I knew the readers would be good, but I didn’t realise how good. At the beginning of the event, Andrew McMillan was awarded the Alderburgh first collection prize for Physical which I’d recently reviewed for The Compass. Afterwards I got the bus back, ended up in The Crosskeys with various people and then got lost on the way home. It’s very dark in Suffolk.

Next morning I woke up and listened to the seagulls. I brought a few going home presents for the twins and got a lift to Snape with Carole Bromley and her husband. It was a really full day. Even if people don’t stay for the whole three days, then Saturday is the day when most people seem to overlap. In general, one of the amazing things is how you meet people who actually exist in real life, not just on screen or in print. It was a pleasure to meet people in the flesh like Josephine Corcoran, Robin Houghton and John McCullough. There were so many others too.That’s another reason for going, it's nice to chat with people you only meet on a screen or in letters. Mainly the conversation revolved about the poetry and feeling overwhelmed - in a good way - by all the poety things going on. I went to a great main reading and the Open Workshop, ambitious to say the least with a roomful of about - who knows- seventy people there.  I had a bit of a break in the middle of the day and I’d recommend leaving Snape for a bit and having a walk around the marshes and surrounding countryside for a breather. I also made good use of the second hand book stall and The Rialto one, and ended up buying, among other things, many copies of seminal poetry publication Joe Soap’s Canoe. Even though it’s all on-line, it’s good to have the real thing.

Then back for more craft talks, coversations and readings. A word on the main readings, they are one hour forty-five minutes long – yes really. There’s usually a break of 15 minutes or so. I have to say and I really mean this, they don’t feel like one hour forty-five minutes. Honestly. The poetry’s top notch. I loved listening to Valérie Rouzeau reading in French, she had a gentle, charismatic presence. Kim Addonizio was incredibly entertaining, she played the harmonica and in homage to Jeremy Reed threw petals over her head. She also had time for a little drama. She asked three male volunteers to come up to the stage and be her backing chorus of, erm, male appendages. I was sitting next to Roy Marshall who bounced up to the stage, good for him. If I were a man, I could have been an appendage too. It made everything very lively and John Burnside was going to have a tough act to follow. I didn’t think he’d be quite my thing at first, but I enjoyed listening to him and his reading rounded off the evening for me. He also had a good sense of humour and knew how to follow after Kim. Another thing that struck me is that the organisers must be pretty damn good to choose readers who can make the most of their readings. This was Ellen McAteer's first year as director of the festival, but due to a family matter was unable to come. Nevertheless it all ran like clockwork.

Then back to Aldeburgh on the coach that the festival put on. Instead of going back to the B&B it was a mild evening (yes really for November) I went for a walk along the sea front, sat on a bench and phoned home. It was so dark. You could see lots of stars but I didn’t walk into the water or anything so that was ok. I was in a lovely B&B. I always meet a few people who tell me about the festival when it was all by the seaside, but I tried to make the most of  being near the beach this year. That night I stayed up late and leafed through my various purchases. Then ZZZs. Then morning, seagull cries and breakfast. Then 4 hour drive home past the Llama farm and some mysterious Suffolk villages.

I was sorry not to stay for the Sunday, but it’s amazing I was able to squeeze it in at all with work and family. There were quite a few more things I would've liked to have attended. I did manage to photograph some of the twins’ teddies on the beach before driving home, to provide photographic evidence for the girls that Owl and Giraffey had indeed been to the seaside. I was still buoyant from the festival and didn’t care how silly I looked. If you were there wondering, yes that was me. 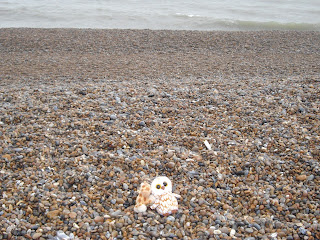