I said I'd post more frequently and here I am again dammit! These are a few notes on recent happenings. At the beginning of the month I heard George Szirtes read in Leicester at Word! and it was quite a experience. I felt really quite lucky to be able to hear such an accomplished poet reading.

Having been away for most of July I missed my own reading for the Magma launch. It's not every day a) I get a poem in Magma and b) the launch is actually held in Leicester, but I heard it was a good evening by all accounts.

Equally sad about missing the July Shindig, but have been busy organising another one in September. So a few things going on in autumn.

Firstly Issue 13 of 'Under the Radar' is out. This is an important issue for me as it's my first as reviews editor! It's also Matt Merritt's first issue as co-poetry editor and I've enjoyed reading the poems. It has been a pleasure working with some excellent reviewers. Peter Carpenter, Kim Moore, Deborah Tyler-Bennett, Charles Whalley, Michael Thomas and Simon Turner all have reviews in the current issue. Starting to get underway for the next issue now.

Also have a couple of poems, 'Gangsters' and 'Mr Alessi Cuts the Grass' in the new issue of 'The North' as well. It arrived on the doormat the other day and it's a really jam-packed issue. I can't seem to find an image of it on-line, so here's me shoving it in front of the laptop camera: 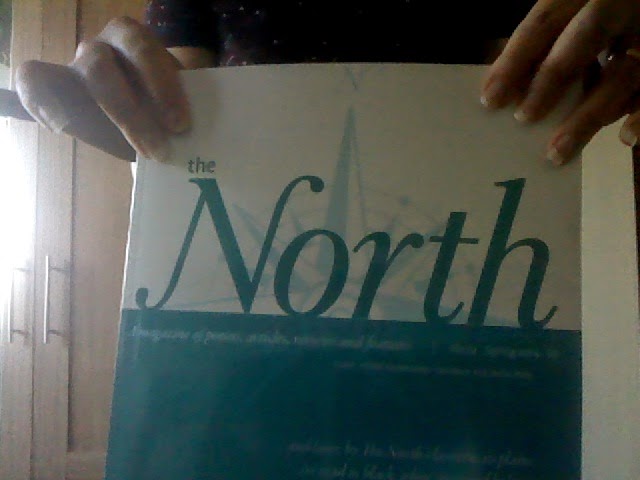 This issue was guest edited by Jonathan Davidson and Jackie Wills and it's out now as they say.

I've been reading a bit too and have a small horde of books to enjoy, including some recent publications by Nine Arches Press, quite excited to have new collections from Richie McCaffery, Mark Burnhope, Josh Ekroy and Tony Williams. There's also a swish new pamphlet by John Foggin entitled Backtracks and a 1969 hardback edition of Terry Street by Douglas Dunn, as well as some pamphlets for review.  So I've got enough to be getting on with. There have been poetic disappointments too, I was rejected for a course I really wanted, but hey ho on we go. In between the summer holiday cracks of making loom band necklaces with the twins and meeting Billy the Bear (a highlight) I managed to scrawl a couple of poems. I'm not, however, expecting miracles on the writing front. Come autumn, however, I'll need to focus a bit more, but for now it's mainly days out and loom bands. I make a mean fishtail bracelet.
Posted by Maria Taylor No comments:

Email ThisBlogThis!Share to TwitterShare to FacebookShare to Pinterest
Labels: George Szirtes, Magma, The North, Under the Radar

Down the Rabbit Hole


It's very easy to fall down a rabbit hole.

Alice falls down a rabbit hole and becomes suddenly part of something wondrous and insane. I can't help feeling that when you write, the internet can feel a little like that. There are so many advantages to having the web: you can have a handy reference library of portable dictionaries and thesauruses; read useful articles; find out about opportunities; communicate with people across the globe about the value of your semi-colon in line 4; share and receive happy news, that kind of thing. But sometimes it's easy to feel overwhelmed. There are always new books out and you can't read them all; there are always things you could and should be doing; there are always awards, competitions you'll never win. It can get a bit much sometimes. It feels as the world is moving much quicker than you are.

My husband, who I should add is only 5 years older than me, remembers a different world without the internet, or in particular the advent of Web 2.0 which changed absolutely everything. When he was but a mere teen flowering into his twenties he used to write, read and send things off in envelopes. The world of writing announced itself in envelopes which appeared now and then. Now you can simply scroll down and bang! Before you've so much as blown your nose there are 6 interesting blog pieces to read; another competition; X magazine opening for subs and oh look there's someone who won the comp you entered and didn't win. All this while you're trying to hoover the living room; go through spreadsheets or hanging on the end of a phone while on hold listening to Bach. For someone who has a short concentration span at the best of times even I find I can't keep up!

I think blogging and reviewing really do have a place as a way of getting a hold on what can otherwise feel ephemeral. I know in one way it's contributing to the traffic jam of information, but they're just as important for the person who writes them as the reader. They're a way into giving your own thoughts and responses a shape and some permanence in an impermanent environment. So my advice to someone who needs a handle, as it were, is to make your own handle and yes that probably means more frequent blogging in my case too.

*Final note* I am including a link to a poem on Anthony Wilson's excellent website titled 'Poem for Someone Who is Juggling Her Life' by Rose Cook, as it seems quite relevant and you will find it here.