It's been another busy week. Am starting to really miss actually writing poetry, though in the last seven days I've certainly heard a great deal of poetry. Seven days ago I read with poet, colleague and all round kind soul Simon Perril at 'Jazz and Poetry' in Nottingham. We also read with some local student poets and the jazz came from John Lucas' band 'Four in a Bar.' Geddit? Simon read from his new Shearsman book 'Archilocus on the Moon.' I've said it before and I'll say it again that Simon's collections are some of the most cohesive I've every read. So the readings went on and jazz was played between them and the Hotel Deux was an intriguing venue. A former hotel, with the downstairs divided into different rooms and the 'jazz room' itself had lots of fascinating instruments pinned to the wall. There was even a bouzouki, my dad would've loved it. I met my first Liverpudlian poet of the week as well, Andrew Taylor, and want to read more of his work. If you'd like too see video evidence of Simon and I reading then click here. It's on Facebook. Event organiser David Belbin was the camera man.

Then Saturday and De Montfort held it's fifth annual book festival 'States of Independence'. There were lots of interesting panels and book stalls. I ended up buying loads of things. States was also the venue where I met my second Liverpudlian poet of the week, Sarah Crewe. She was reading with Alan Baker and my other colleague Kathy Bell, as part of a panel of Oystercatcher readers. Sarah's poems were a breath of fresh air for me. Alan's were full of intricacy. There was so much energy in that room and it was great to hear poems from Kathy's new pamphlet 'At the Memory Exchange.' I also attended the Soundswrite panel. They're a local group of women writers who meet up regularly in Leicester. Caroline Cook delivered a strong reading from her new Soundswrite pamphlet 'Primer' and there was a host of other poets reading too, including Jayne Stanton who will soon have a pamphlet out with Soundswrite as well. Also went to Deborah Tyler Bennett's and Ann Featherstone's Music Hall panel. For a few moments I dreamed of being Vesta Tilley, wouldn't that be an interesting way to live?

I also hosted a panel with Rich Goodson, Cora Greenhill and Gregory Woods about 'The Poetry of Sex' anthology. We read poems about and around the theme. Some more 'about' than others! We all have poems in the anthology of the same name. There were some mixed feelings about the book aired in the panel. Suppose all anthologies run that risk. I don't really write about sex directly (is this sometimes a 'female' thing?), so I placed the work in the context of my upbringing, life and culture. One of the poem's I read was 'Ante' which appeared in New Walk magazine last year, and was about the decision to have children:

Our children are only a blueprint. We imagine their milky bodies
flickering in a sonogram. We unpack our cases. They’re hiding

under our crisp bed in the hotel. The sun sinks into a cocktail glass.
Mouth the Spanish word for blood, think out loud: there will be

so many things to learn. Drink one guilty mouthful; let bubbles
fizz between your teeth. Mark this occasion of knowing in silence.

You no longer recognise the tilted face on the curve of your glass.

Obviously that decision changed mine and my husband's life considerably! Our twins were also at States and were jubilant at having won a box of chocolates in the WORD! raffle and having a go at printing out letters courtesy of Cleeve Press. There were many stalls and it was great to see Jane at the Nine Arches Press one, as well as Jacqui Rowe at Flarestack. Brought three pamphlets! Was good to see 'The Interpreter's House' on sale too. Editor Martin Malone was selling copies of the magazine and the latest issue (55) is great. Also nice to see the poet David Clarke over from Cheltenham, we chatted about the pleasures and pains of poetry reviewing during lunch. There were lots of things I wanted to attend, but it was impossible as the sessions were back to back. Roy Marshall and Rory Waterman would've been a treat, as would've Renni Parker and the WORD! Crew. Sorry I couldn't cover everything!

Ok, so here's my obligatory shot of all the books I brought..actually they're pamphlets: 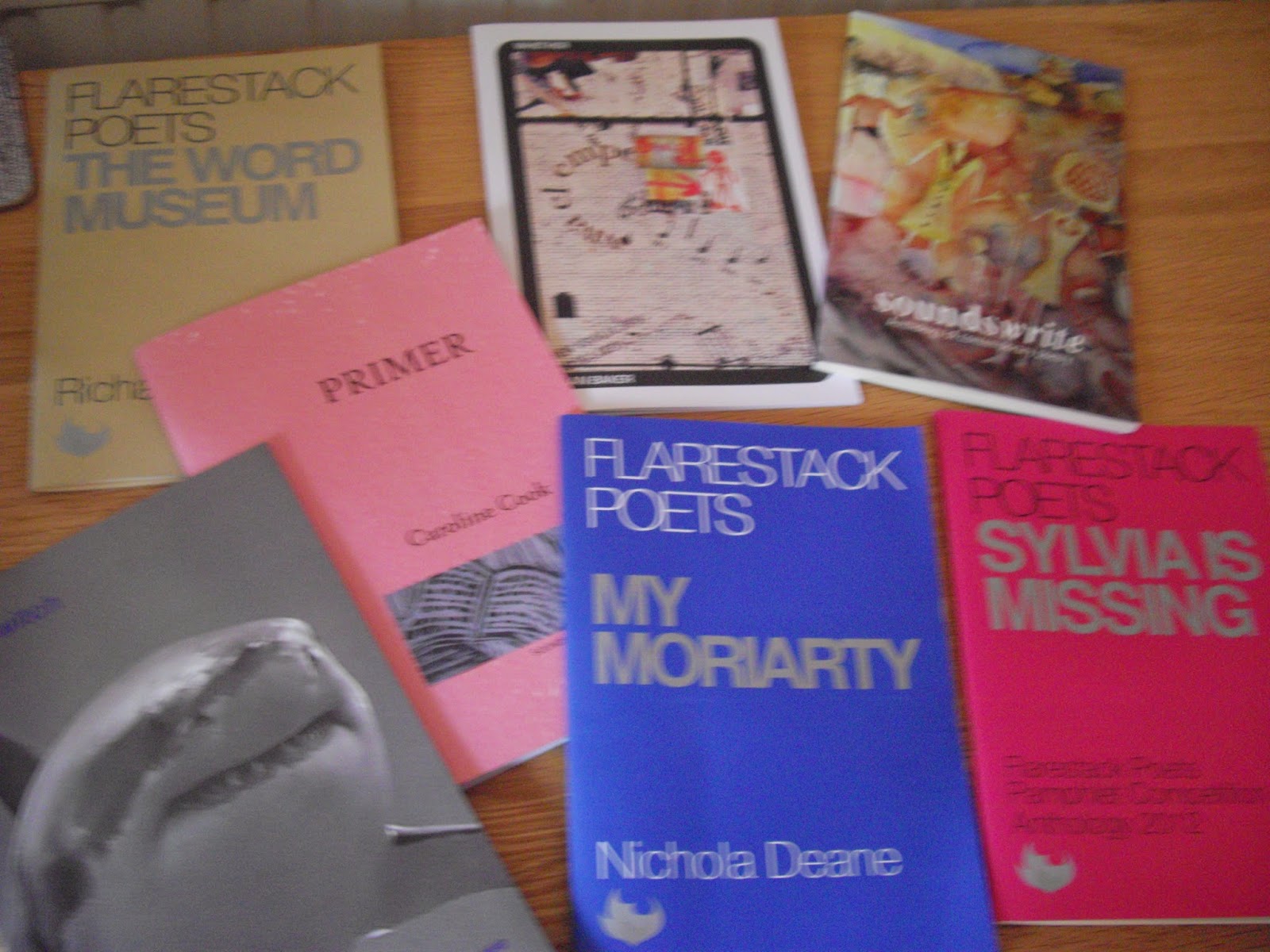 It's good to go to such events! Especially at a time when I'm finding little time for my own writing. The small presses save the day... again.

p.s. I have two poems on Josephine Corcoran's excellent blog 'And Other Poems' including the one about a certain actor, which you can read here.
Posted by Maria Taylor No comments:

All That Jazz... 'Love in Leamington.'


It's almost a month now since I read at the 'Love in Leamington' event. What a lovely evening that was. Before Christmas I was asked if I'd like to take part. I had to write a poem along with my husband, Jonathan Taylor, on the theme of love. The poem would then be performed with a jazz accompaniment. The musician in question was Steve Tromans, an EXCELLENT pianist and composer. One lyrical Saturday afternoon in late Jan, Steve came round to ours with Charlie Jordan. Charlie's a fab poet and she's also a radio broadcaster, so you can imagine how smooth and engaging her delivery would be. So there I was on my own sofa listening to Charlie and Steve practising their music and poetry on our piano in the front room. Bliss! Our house had become a sort of Jazz commune for a while. Beret wearing will follow...


On the 14th of February, Valentine's of course, we all performed our pieces, with jazz piano from Steve, percussionist  Lydia Glanville and singing from Alyson Symons. Everything was new and specially commissioned for the evening. The other commissioned poets were Roz Goddard, Spoz, Julie Boden, Roy McFarlane and of course Charlie. Roy managed to battle against the storms outside, various cancelled trains and made it to the show just in time to perform his very passionate piece. It was an evening of uplifting poems and music. Roz moved everyone with her poem about her daughter leaving home; Spoz made me giggle with 'Writing You'; Roy's piece 'A Love Supreme' was powerful and deeply felt; Julie's dealt with the loss of love and Charlie's piece 'Beginnings' was about the moment of starting a new relationship. One of the many highlights of the evening was Charlie's red dress. I'd be working on a poem about wearing red and Charlie inspired me to finally figure out where the poem was going.


Talking of writing I learnt something rather interesting about how we order poetry into verses. When I gave the original copies to Steve, they were neatly organised into stanzas of particular lines. When he worked his jazz magic the poems came back to me looking very different. The words were the same of course, but the line endings and overall structure of the poems had changed. He managed to needle out all the lyricism which was there that maybe I couldn't 'hear.' It's made me really appreciate the 'sounds' involved in writing poetry and even a plain-spoken conversational style can have that going on. Our poem was a question and response style piece and Steve's imput was invaluable. What a special treat to have your poetry set to music.

The event was a sell-out and held at Leamington Library. It was funded by 'Poetry on Loan' and hosted by Librarian Jan Dawson and Radio Wildfire impresario David Reeves. Photos were taken by Joanna Ornowska. The idea for 'Love in Leamington' was devised by Julie Boden and a round of applause for her.

I am also writing this after another Jazz and Poetry event last night in Nottingham. More on that later. It'll be berets, stripey tops, capri pants and black shoes for me perhaps.

Of course if you'd like to see all the photos and listen to the performances do click here.
Posted by Maria Taylor No comments: